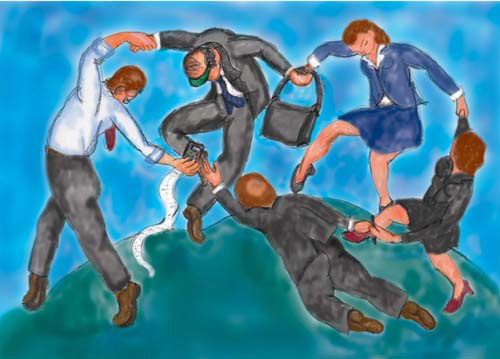 The Accountants and Tax Preparers Full Employment Act has gone into full swing with the looming filing deadline in clear view. All over the country, an army of over a million sharply-dressed CPAs and accountants is gearing up for yet another marathon of digesting disorganized collections of receipts that arrived in supermarket bags and the proverbial shoeboxes brought in by their frazzled clients. Tax season for accountants is like Christmas season for retailers. This is where all the long hours are put in and all the money is made.

The bountiful extravaganza is the result of the prolific output of congressional tax writing committees, who in collaboration with the more than 15,000 lobbyists representing a gaggle of special interests, have succeed in concocting the vile sausage that is the US Tax Code, all the while billing over $3 billion in fees.

Incredible as it may seem, the 2010 U.S. tax code is 71,684 pages in length. That is enough to cover an entire acre of land or to create a trail of paper nearly 13 miles long. It contains some 600 forms, each designed to benefit one specific group or another

Nobody understands the tax code, least of all the legislators who wrote it or those in charge of enforcing it. During a recent interview on C-SPAN, IRS Commissioner Douglas Shulman conceded that one reason that he does not file his own taxes is because he believes the tax code is too complex. Indeed, his predecessor, Mark Everson, was of a similar mindset. Some 60% of Americans use a tax preparer, and another 20% use tax-preparation software.

And this may not even be enough. A few years ago, USA TODAY asked three tax experts, a CPA and two enrolled agents, to prepare an income tax return for a hypothetical family. None of the results agreed. Incredibly, a 2008 study found that when the IRS was contacted by taxpayers regarding a tax law issue, its experts gave out the wrong answer about 10% of the time.

There is nothing you can do about it, so it is best to join the accountants in their merrymaking and hope for the best on April 18.