Jack Frost nipping at your nose? 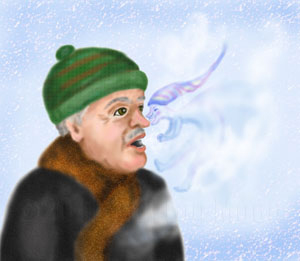 Is Jack Frost nipping at your nose? It’s really cold outside and you can feel the bite of the frigid air. In recent days, the country has been beset by a brutal cold wave that has dropped vast amounts of snow and ice upon the land. Schools are closed, flights have been canceled and people have been stranded in their cars on the highways. In some major cities, life has virtually crawled to a standstill. 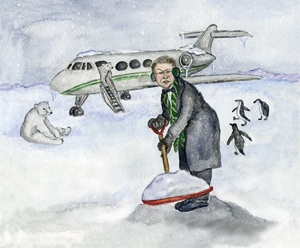 Al Gore and friends are off to the climate summit

Is climate change real? How do we reconcile real world experience with scientific observations? If it can be demonstrated that the planet is warming, was it caused by human activity? If so, are we capable of effectively carrying out measures to reverse the warming trend? Can we do so without compromising our fragile economic recovery? Will China and India go along? All these questions have my head spinning…

Yesterday morning when I got up, it was minus 27 degrees outside. It was 49 degrees in our bedroom. Brrr… No global warming here in Wyoming. The snow is several feet deep outside and sooner or later I will have to put on long underwear and lace up my Sorel boots and go take a shovel to it. None of our cars will start, even if I had the energy or inclination to dig them out.

A few days ago, in response to comments made on the air by Bill O’Reilly regarding the exceptionally harsh winter currently affecting the Eastern Seaboard, former Vice President Al Gore countered in his blog that for years, scientists have argued that warmer air around the world absorbs moisture which in turn falls in the form of snow when it encounters colder temperatures.

It must be mighty hot somewhere in the world to produce these massive countervailing deep freezes across the United States. I don’t know what to make of all this, but I would gladly accept some global warming, even just a little regional warming, so that I don’t have to wear mittens while I type this blog. (It was 44 degrees in my little studio when I sat down at my computer this morning.)