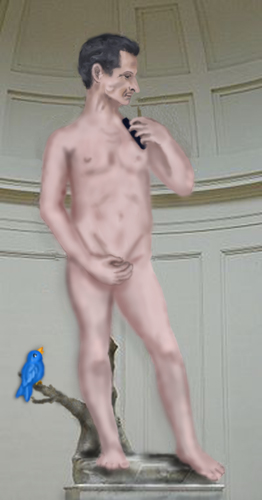 New York Representative Anthony David Weiner was smitten by the extensive publicity that he attracted with the widely tweeted and re-tweeted images of his manly physique. This led the congressman to decide that it would be more than appropriate that his hard body be immortalized in stone for the benefit of future generations.

During the free time afforded by his leave of absence from Congress and his stint at the New York Narcissism Rehab Clinic, the congressman performed some in-depth Internet research and was successful in locating a direct descendant of famed Renaissance artist Michelangelo Buonarroti, who turned out to be a retired plumber and part-time hobby sculptor who lives in New Jersey and who goes simply by “Mike Angelo.”

The congressman and Mike discussed the project and sketched out a rough design. Mike produced a 1/10 scale clay model which Rep. Weiner immediately approved. A few wealthy constituents generously provided the necessary funding and the project was launched. Before long, the final marble rendering was delivered on time and within budget and was on its way to the Capitol for inclusion in Statuary Hall to take its rightful place alongside other American luminaries.