The Birth of Bigfoot 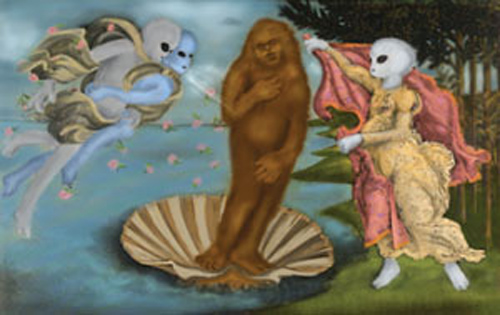 The Birth of Bigfoot

Art historians in Florence, Italy call an impromptu press conference to announce a shocking discovery regarding an image found to lie underneath a famous Renaissance painting.

Earlier this year, museum curators at the famed Galleria degli Uffizi in Florence, Italy removed 15th century painter Sandro Botticelli’s masterpiece, the “Birth of Venus” from public display so that it could undergo routine cleaning and maintenance. At the museum’s art restoration laboratory, a team of highly experienced conservation and restoration experts employed three-dimensional infrared technology to look beneath the original layer of paint in order to help determine the cause of the 15th century painting’s slow deterioration. What they found shook the foundations of the art history community.

It is not unusual in the case of historical works to find an earlier painting or sketch by the artist underneath a well-known masterpiece, as was the case with Da Vinci’s “Virgin on the Rocks.” However, in most instances, those images were revealed to be sketches that were the basis of the final work, or occasionally, simply a painting that the artist was not satisfied with, leading him to recycle the canvas for a future project.

However, the experts’ scan revealed a shockingly different image that immediately gave rise to centuries-old conspiracy theories and suggestions of a Renaissance era cover-up. For more than five centuries Botticelli’s masterpiece concealed a sinister secret. The image that appeared on the restorers’ computer screens was not a fantasy with Greco-Roman roots, but rather depicted a creature that is all too well-known by present day enthusiasts of cryptozoology and the paranormal: Bigfoot.

Historians speculate that this image may potentially lend credence to the long-held theory that Bigfoot, the Yeti, the Chupacabra and other creatures of legend and folklore may in fact have otherworldly origins. Most students of art history are aware of the abundance of images painted over the centuries that would appear to depict UFOs and their extraterrestrial occupants.

Fellow Florentine painter and Botticelli contemporary, Domenico Ghirlandaio painted his “The Madonna with Saint Giovannino” which clearly shows a mysterious glowing object suspended in the sky above Mary’s shoulder. Also from the same period, “The Annunciation” by Carlo Crivelli, shows an airborne disk directing a focused beam of light right through a building onto Mary’s head. Could visitors from another world have brought strange creatures to live among us, and to what end?

Scholars agree that Lorenzo de’ Medici ordered Botticelli to paint the canvas over because he feared that Savonarola, the Dominican monk who was at the time campaigning vigorously for the destruction of immoral art might denounce it as an act of heresy and order its authors to be punished.