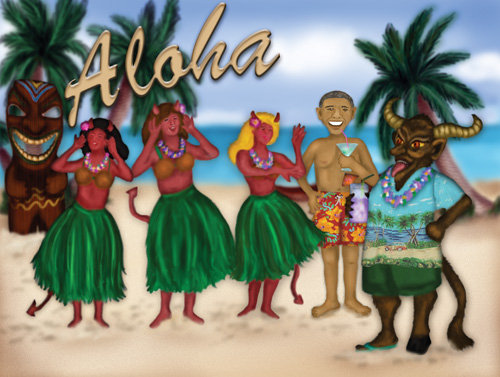 Krampus relaxes on the beach for a well-deserved vacation

After a long cold holiday season of scaring naughty children into exhibiting better behavior, Krampus takes a well-deserved vacation at a warm tropical location. On the beach on Maui, Krampus sips a cold refreshing beverage while enjoying a presentation by a local hula troupe.

In the United States, Santa is taken for granted. It is a foregone conclusion that Santa will always deliver on the presents. Kids in America don’t know how good they have it because no matter how naughty they have been during the year, Santa will never fail to bring them something. In fact, the very worst they can expect is that Santa will fill their Christmas stockings with lumps of coal. This is not the end of the world, because with the soaring cost of energy reaching unprecedented heights, the children can easily pool their lumps of coal and sell them to the local power utility and use the cash to buy the gifts that Santa did not bring due to their naughtiness.

However, in Europe, children have a lot more to fear, particularly in Austria, Switzerland, Croatia and Germany. In those countries, jolly old St. Nick hands out gifts on his feast day of December 6th. However, he does not punish children himself no matter how bad they have been. Instead, he delegates that task to a terrifying horned creature called the Krampus, who accompanies Santa on his visits and metes out punishment according to Santa’s instructions.

The children that Santa has fingered as naughty are seized by the Krampus, who whips them with a switch of birch branches or with rusty chains. In extreme cases involving exceptionally naughty children, the Krampus is said to carry them in his backpack to the forest where he proceeds to devour them. Alternatively, the Krampus simply stuffs them into a sack which he then tosses into a stream.

People who have observed the widespread lack of discipline, manners and work ethic that characterizes today’s youth have suggested that a serious dose of Krampus might be in order here in America.

The origin of the Krampus can be traced back thousands of years. It is believed that the Krampus was an evolution of the Norse god Loki that was slowly assimilated into Christian tradition. Many European countries today organize Krampus festivals on December 5th, the day before St. Nick arrives. A number of designated individuals dress up as the Krampus and go from house to house scaring children with their growls and their switches and drinking schnapps with their parents. As the night progresses, it is not unusual to see the Krampus throwing up in the gutter.

If a Krampus should approach you in the darkness of night, you will certainly know him by his long horns and his most unusual characteristic of having one humanlike foot and another that resembles a cloven hoof of a goat.