The results for Iowa are in! Five candidates underperformed and two exceeded expectations. There was one casualty as a result of this highly contested contest. Today, Michele Bachmann announced that she was withdrawing from the race after failing to meet even the modest expectations in the various polls. This leaves six cats standing.

The outcome was as follows: 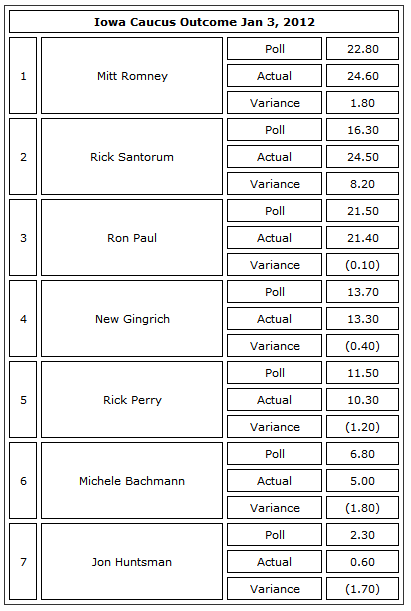 The poll figures cited reflect the composite of multiple polls published by Real Clear Politics on the day prior to the election. Jon Huntsman did not campaign in Iowa. Was Rick Santorum’s 8-point surge for real or was it just a dead cat bounce??

Seven contentious cats are sitting on a fence in tenuous harmony as they anxiously await the outcome of the first rounds of primary polling.

There are no less than 53 contests between January 3rd and June 26th during which countless angry hisses will be exchanged and much fur will fly.  It is now high noon in the State of Iowa, and with an unprecedented 41% of undecided voters, no one knows who will prevail. Which cat will begin to gradually fade into oblivion, like the Cheshire Cat of childhood lore? Could the outcome possibly be similar to the legendary duel between the Gingham Dog and Calico Cat, who simply ate each other up, leaving no trace of either adversary?

Only time will tell…