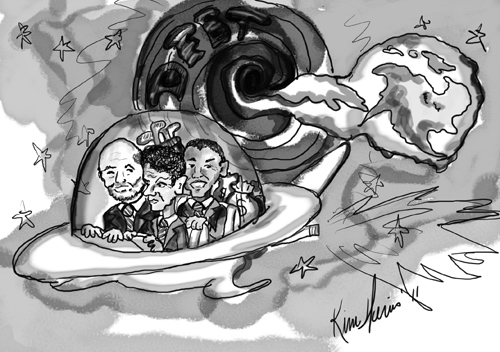 NASA scientists recently announced that they have been watching a high-energy radiation beam emanating from a remote galaxy 3.9 billion light years away. Their findings were published last week and revealed that the beam, which astronomers have named Swift J 1644+57, was likely a black hole that was in the process of capturing and absorbing a hapless star that innocently wandered into its neighborhood.

Just a few days later, NASA scientists informed the White House that they had observed the possible formation of a similar black hole in close proximity to the Earth. Closer examination of the phenomenon revealed that it was actually a green hole that appeared to consist of a nebula of worthless US currency. Unprecedented government spending over the last several decades congealed into a critical mass of depreciated dollars circulating around the Earth and ultimately collapsed into a voracious vortex from which nothing could escape. The gravitational effects of this phenomenon were believed to be provoking earthquakes and spawning extreme weather around the globe and the anomaly was now beginning to digest the moon.

This horrifying discovery was promptly classified and White House staffers immediately declared a DEFCON 1 condition and sprang into action to execute the plan designed to protect the nation’s leaders in the event of imminent destruction of the planet. Frenzied calls were made to the Area 51 Air Force Base at Groom Lake, Nevada to secure a captured alien saucer to evacuate President Obama, Treasury Secretary Timothy Geithner and Fed Chairman Ben Bernanke. The saucer was dispatched without delay and the trio was whisked away to an undisclosed location somewhere in the cosmos.

Democratic congressional staffers told Speaker John Boehner and Congressman Paul Ryan that a Commander would be waiting for them on the mall in front of the Capitol and proceeded to herd them into what the two legislators were led to believe was a nuclear powered evacuation pod. 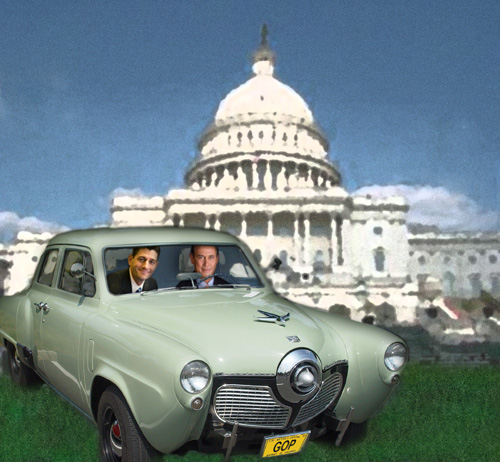 Speaker John Boehner and Congressman Paul Ryan were elated when they thought they would escape in a nuclear powered evacuation pod, but when the frenzy subsided they soon realized that they were sitting in a 1951 Studebaker Commander

After the value of their investment in T-Bills dropped dramatically, the extraterrestrials sent a repo fleet to Washington to collect all the valuable items they can find

Secretary Geithner’s ingenious rescue plan is thwarted by the unexpected demands of unusual and unexpected bondholders.

The warning signs of the stress cracks in the US financial system had been appearing for some time now, but the cunning team of Geithner and Bernanke had it all figured out well in advance. The Chinese will continue to buy our Treasury debt no matter what, because they need to continue providing fuel to the American consumers to buy products from China and help deal with the growing overcapacity in that country’s manufacturing sector. Also, a selloff of their US Treasury holdings could trigger a drop in the dollar, which would deprecate the value of their investment.

For some months now, the financial press has been abuzz with increasingly alarming stories about the unthinkable prospect of a default on US Treasury obligations. Opposing congressional factions are far from agreeing on the prerequisites for containing the burgeoning national debt and President Obama has made it clear that any compromise the legislators arrive at must also conform to his vision for the country. Otherwise, he will not hesitate to exercise his veto power.

The storm clouds began to gather back in March when Pacific Investment Management Co sold off all the government debt from their $237 billion PIMCO Total Return Fund, the largest mutual fund in the world. Then, in April the respected ratings agency Standard & Poor’s announced that it was revising the United States’ AAA sovereign credit rating from ‘stable’ to ‘negative.’ That move was precipitated by the agency’s concern that a budget ceiling agreement between the parties might not be reached in time to be implemented and thus lowering the US’s creditworthiness with respect to other peer sovereigns who enjoy the same coveted rating.

Treasury Secretary Tim Geithner promptly shrugged off S&P’s ominous announcement and told Bloomberg Television that the low cost at which the US can borrow is proof that both local and foreign investors believe that the US economy is strong and that its debt will hold its value. However, S&P placed US sovereign ratings on formal credit watch, stating that there is a 50-50 possibility that the agency could downgrade the country’s debt. Yesterday, S&P reiterated that the country’s rating could be cut to AA as early as August, move that would likely trigger an increase in short and long-term interest rates.

At present, just days short of the predicted meltdown deadline of August 2nd, the polemics in Washington continue to rage unabated, with legislators seeming oblivious to the implications of S&P’s stern warnings which were soon echoed by Moody’s Investor Service, who also put the US on a downgrade watch. The Chinese credit ratings agency Dagong followed on Moody’s heels with a similar warning of their own, citing the sluggish growth and persistent deficits in the US.

Andy Xie, the former chief economist for Asia for Morgan Stanley, recently stated that China’s financial policy makers are “very, very bearish” on the US dollar and are seeking to diversify the country’s holdings away from America’s faltering currency. China’s purchase of euro-denominated bonds may provide them with some diversification of risk, although the Chinese recognize that the euro might be a poor substitute for the dollar due to the precarious financial state of the PIIGS countries, all of which may have to be bailed out in the future as the European Central Bank attempts to contain that continent’s sovereign debt crisis. Citing John Maynard Keynes’ supranational currency proposed back in 1940, the ‘Bancor,’ Zhou Xiaochuan, the Governor of the People’s Bank of China, has advocated replacing the US Dollar with IMF Special Drawing Rights (SDRs) as the new centrally managed global reserve currency.

Unbeknownst to Geithner and Bernanke, officials at the People’s Bank of China secretly devised a novel strategy to decrease their exposure to the dollar component of their portfolio currently estimated to contain in excess of $1 trillion in US Treasuries.

Those who follow UFO events are likely aware of the rumored existence of a secret alien base located in the vicinity of the Kongka La Pass in the disputed area of Aksai Chin on the India-China border. This bleak, frigid, inhospitable Himalayan pass sits at 17,000 feet elevation and has a population density of only 3 people per square mile. It is here where strange glowing cylindrical objects and silent triangular craft are said to emerge from the ground and depart vertically at unearthly speeds.

The Chinese have been aware of this base for a long time and some years ago established a friendship with the extraterrestrial beings who have built a vast underground facility in the area. At some point during a casual discussion concerning the mineral resources on Earth, the aliens mentioned that gold exists in abundance on their home planet and is mined principally for use in electronic circuitry, as it has no other real value to them. The Chinese delegation got the aliens’ immediate attention when they told them about their vast holdings of interest-bearing paper instruments issued by the richest and most powerful nation on the planet. The aliens were unfamiliar with the concept of lending something of value and actually getting back more than you lent out, and rapidly warmed up to the Chinese proposal to trade gold for US Treasury obligations.

A quick back-of-the-envelope calculation was performed, and it was agreed that the People’s Bank of China would trade 20,000 tons of gold in exchange for $500 billion of US Treasury notes. The deal, which represented about a 50% discount on the current market value of gold was quickly consummated and a cargo saucer was dispatched to fetch the gold.

Well, the end result was predictable. In spite of all the effort put forth by the Congress and President Obama, the dollar declined in value, interest rates soared and bond values collapsed. The extraterrestrial investors were outraged as they had been led to believe that their investment would be backed by the ‘full faith and credit’ of the most powerful nation on the planet

However, when the extraterrestrials went to cash in their T-Bills, they found them to be worth a lot less than they had been told and so they sent a repo fleet to collect whatever Earth items of value they could find. They felt it was appropriate to start with the US Treasury Department, so upon arrival they quickly put their tractor beams and giant vacuums to work to collect everything they could interpret as collateral.