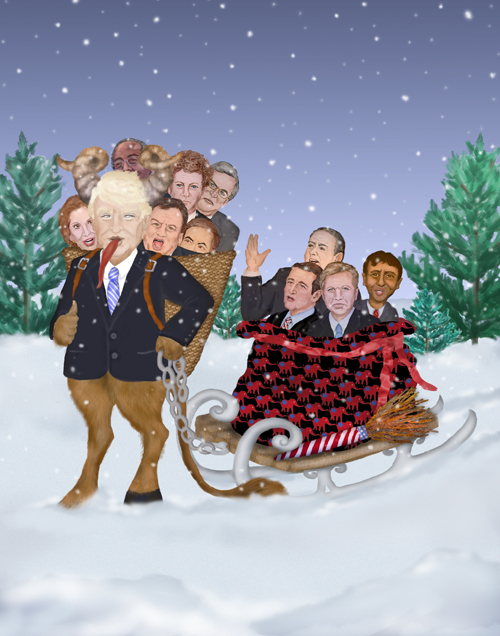 The Trumpus spirits away a load of naughty office-seekers to be whipped in his underground lair deep inside the elegant and exclusive Trumpus Tunnel and Casino deep beneath Atlantic City.

In Germany, Austria and Italy, Santa and Krampus have been in a partnership since time immemorial. Their special compact specifies that Santa will reward the good children and Krampus, a part-demon, part-goat creature, has the responsibility of punishing the bad ones. This way, Santa does not tarnish his public image as a kind, jovial old fellow loved by all.

In the United States, the worst a naughty child can expect from Santa is a lump of coal in a Christmas stocking. However, in Europe, the fate of misbehaving children is far grimmer. Santa doesn’t bother with them. After leaving presents for the good kids, he instructs Krampus to collect the naughty ones and stuff them in his basket to be taken away to be whipped with switches made of birch twigs, or worse, to be devoured altogether.

Due to the alarming increase in naughtiness and bad behavior on the part of adults around the world, Santa decided to add a new position to his holiday workforce. His longstanding sidekick Krampus will now be getting some much-needed assistance from Trumpus, a new hire from America.

Over the last few months, Santa had deployed a number of his best Elves on a Shelf to infiltrate the homes of prominent candidates and observe their behavior. When the elves reported back with their findings, Santa was horrified by what he heard, especially regarding the appalling exchange of insults and accusations between the candidates. Santa instructed Trumpus to mete out deserving punishment to them. The wily Trumpus lured them all in under the pretense of a sleigh ride to a political rally where wealthy donors would be present. But before they knew it, they were collected into a basket and swiftly consigned to a dungeon in Trumpus’ subterranean lair in the elegant and exclusive Trumpus Tunnel and Casino beneath Atlantic City where they soon realized that all the slot machines are rigged, the hors d’oeuvres are stale and none of the drinks are free.

How the Government Grinch Overregulated Christmas 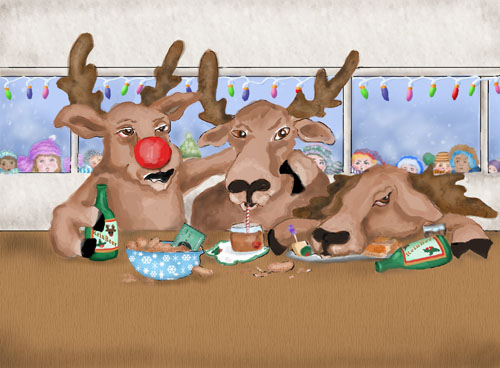 After the Government Man in Green canceled their appearance at Murdoch’s, the reindeer retreated to Mingle’s Lounge for a snort

Management at Murdoch’s Ranch and Home Supply had a great idea! Why not invite Santa’s reindeer to visit Laramie, Wyoming and entertain the city’s children, many of whom had never seen a real live reindeer. They advertised far and wide for this exciting event, and many looked forward to attending.

It will be a fun occasion for both young and old!
A festive way to forget about the cold
So Murdoch’s emailed the North Pole with a request
Santa, please send out your reindeer at our behest

Well, Santa had crossed swords with the regulators in years past
When the FAA rejected his flight plan as traveling too fast
And then cruelly ordering him to maintain Flight Level two-fifty
Heartbreakingly overflying the homes of the neediest kids in the city

So, a ground crew of elves preflighted the sleigh
Making sure it was airworthy to soar away
The team was hitched up and in scarcely a flash
Reindeer and elves arrived at Murdoch’s in a dash

“No so fast,” said the Government Man all dressed in green
“Trafficking in reindeer is a crime most obscene
It constitutes a violation of Game and Fish regulations
Read Chapter 10, section 5(d)(ii)(F), if you have the patience” 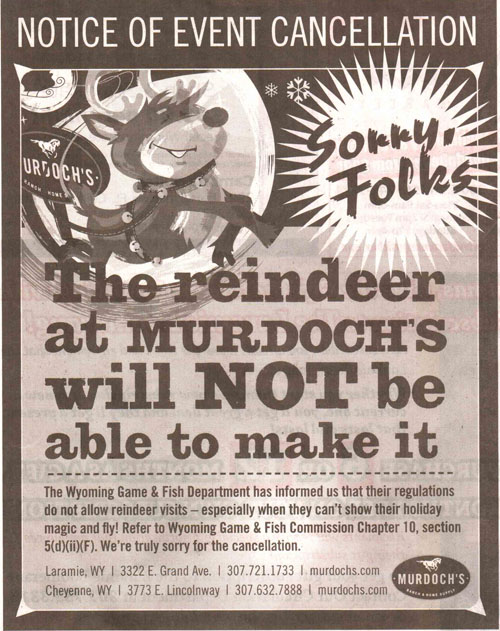 The Government Man in Green wishes: “Happy Christmas to all, and to all a good-night!”

Then Rudolph suddenly blurted out:

“Now Dasher! now, Dancer! now, Prancer and Vixen!
On, Comet! on, Cupid! on Donner and Blitzen!
Trot across the parking lot to Mingle’s Lounge
The first round’s on me, no need to scrounge”

Rudolph bemoaned the absence of Christmas cheer
Prompting him to cry out, “Barman, another round of Reinbeer!”
Soon Blitzen was blitzed and Comet had lost consciousness
Both of them casualties of regulatory excessiveness

Eventually the barman said, “Gentlemen,” pointing to a sign
“You’re a delightful gang, but it’s now closing time”
So they gently lifted Comet’s face out of his plate of nachos
And carried him back to the sleigh like a sack of potatoes

Weeks later on Christmas Eve, Santa alighted on the roof
Of the residence of a ranger widely regarded as annoyingly aloof
Down the chimney he shimmied, stealthy as a mouse
To place lumps of coal in all the stockings in the house

Relaxing at home with Mrs. Claus in the wake of a busy Noel
Santa said “Honey, I haven’t seen my American Express card in a spell”
She promptly replied, “I gave it to Rudolph to fuel your sleigh
And before I could ask for it back, he was well on his way.” 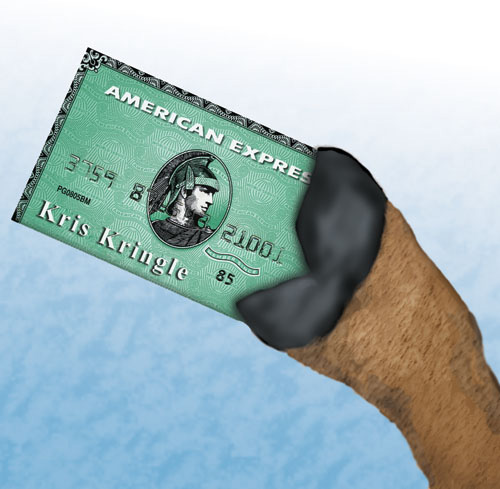 Rudolph the Red-Nosed Reindeer says: “Don’t leave the North Pole without it”